Tribes had nearly $13 billion economic impact on state in 2017

OKLAHOMA CITY — The 38 federally recognized tribes in Oklahoma had a $12.9 billion impact on the state in 2017. The study found that the tribes directly employ more than 50,000 people and support a total of 96,000 jobs to tribal citizens and non-citizens, accounting for more than $4.6 billion in wages and benefits to Oklahoma workers in 2017.

"This study shows that Oklahoma tribes are providing valuable jobs and employment to Oklahomans throughout the state," said Lisa Johnson Billy, Oklahoma Secretary of Native American Affairs. "We look forward to continued growth and cooperation that benefits all Oklahomans."

"Unlike corporations that move based on the economy and population migration, tribal nations are permanent and invested in the long-term growth of their jurisdictional area as well as the state as a whole," said Neal McCaleb, Chickasaw Nation Ambassador At-Large to the United States.

In the healthcare realm, tribes paid $213 million in Medicaid expenditures at tribal healthcare facilities, saving the state $88 million in 2018 by requiring no state matching funds.

The tribes have invested a total of $200 million in transportation infrastructure, with nearly 27,000 miles of highways and roads supported. Oklahoma is first in the nation for federal dollars contributed through the U.S. Department of Transportation's Tribal Transportation Program.

"Oklahoma tribes have invested greatly in the state, and we are proud that our investments are benefiting all Oklahomans in a variety of service areas, such as public transportation, cross- deputization with law enforcement and community centers," said Elijah McIntosh, Secretary of the Nation and Commerce for Muscogee (Creek) Nation and Chairman of the Board for the Oklahoma Tribal Finance Consortium.

Through gaming compacts between Oklahoma-based tribes and the state, tribal nations submit a percentage of their Class III gaming revenues for the exclusive right to operate casinos in the state. Oklahoma sends the first $250,000 of these fees to the Oklahoma Department of Mental Health and Substance Abuse Services. Of the remaining funds, 88 percent is earmarked for public education supporting all Oklahomans.

The tribes have invested heavily to support local communities and efforts. Oklahoma tribes have paid more than $1.5 billion in exclusivity fees since 2006. More than $1.3 billion has been earmarked for public education. In 2017 alone, $198 million was paid to support Oklahoma education.

"Tribes provide critical services for rural communities," said Cheyenne and Arapaho Tribes Gov. Reggie Wassana. "We are proud to provide monthly assistance to more than 2,100 Cheyenne and Arapaho elders for subsidies such as food, utility, medical and other basic needs. Additionally, we support non-tribal entities such as public schools, school activities, fire departments, EMS services, city utility projects and numerous civic organizations within our tribal jurisdiction that spans across 12 counties in western Oklahoma."

Kyle Dean, associate professor of economics and the director for the Center for Native American and Urban Studies at Oklahoma City University, analyzed data from 15 tribal Nations based in Oklahoma and prepared the study. 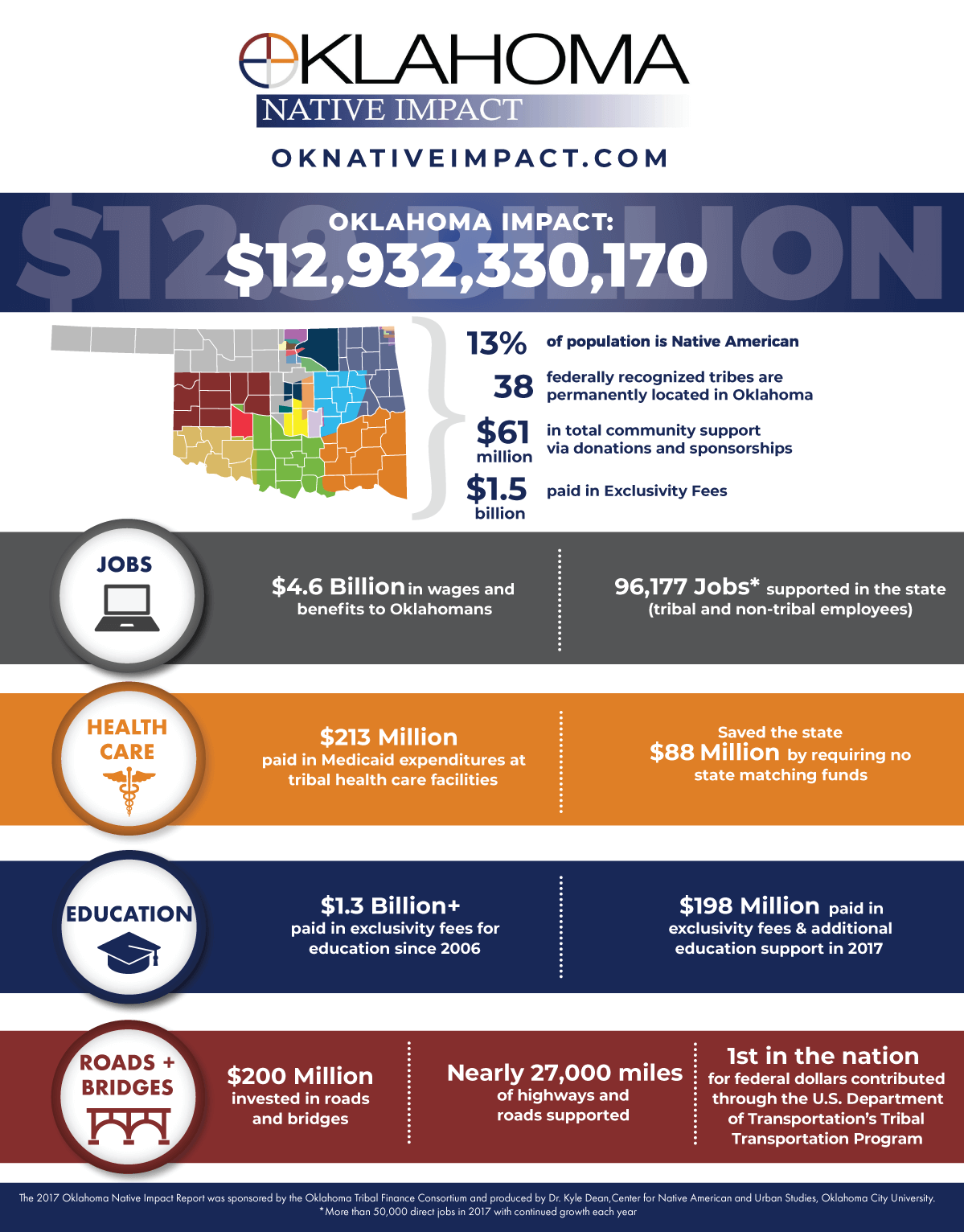